It’s here, the last day, the final push, the last leg, the remaining 14 miles from Caldbeck to Carlisle!!

But the girls have had a recalculation, there’s still a further 5.8 MILES to catch-up on from Day Four. It’s now a 20 mile (30k) finish for the week!!!  That’s a walk in the park for Lucy, but everyone is worried about Kadie (AKA Shorty), is it a leg to far for the l’arl Sausage?

Hang on, Sainsbury’s isn’t on the OS map for Day Five?

OMG, have they taken another wrong turn?

A quick double check with ‘Team Lucy’ Thankfully no, but it’s a 7am start into Penrith to buy more Blister Plasters!!!

So, at 8.30am the girls start again at Mosedale, where they are joined by ‘Ginny’, Joshua, Janet, and Andrew.

They have a gentle walk up the valley and then some Ghyll scrambling up to the lingy hut. This is used as a temporary shelter from the wind or bad weather.

They find a visitor’s book and leave some comments..

Then, off over to High Pike and the gentle amble down to Nether Row, where they bump into Chris Bonnington on his way up (Really, they did, he lives there)

They arrive at OddFellows Caldbeck, were they pick up ‘Alfie’, Steph and Lindsey. Kadie is starting to flag now, she’s completed about 55 miles (90k) of the 78, so not bad for those shorty legs. But, she’s a trooper, a badger hunter, she marches on.

They follow the River Caldew up through Sedbergham. That leads on then to Dalston.

At the Bridge End Inn, Dalston, there’s a well earned glass of lager, followed by paracetamol and Ibuprofen in preparation for the last few miles into Carlisle. The girls have blisters, left, right and center, but the sun is shining and there’s a warm gentle breeze blowing through the beer garden.

But disaster strikes!!! Shorty flops over and refuses to budge. At 100k, she’s hit the Dachshund pain barrier.

Between them, the girls carry Kadie on and off for a while, but as darkness falls the rest of the walk is a flat and a smooth cycle path into Carlisle and she’s soon on her feet. But the tarmac path was very tough on the others feet though.

By 7.30pm, they hit the bright city lights and walk 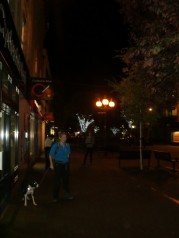 ‘Team Lucy’ would like to thank EVERYONE for their support and to all those very kind and generous people who made donations to:

We haven’t had a final count yet but Lucy has raised over £300 for the charity: